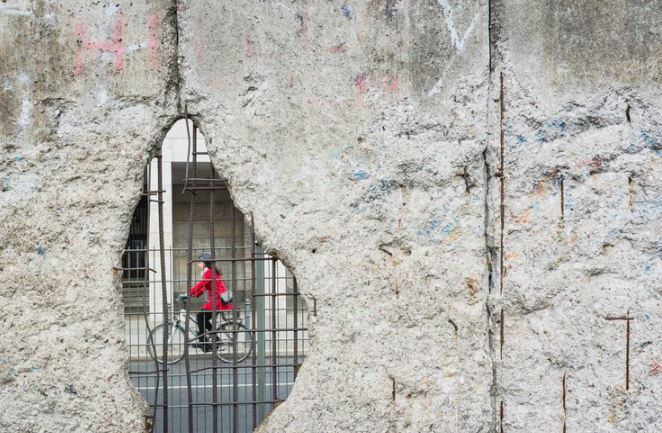 Over the weekend, the ePilot team attended some of the 200 city-wide commemorative events taking place to celebrate the 30-year anniversary of the fall of the Berlin Wall. Since the fall happened 3 decades ago, the makeup of Berlin’s population has changed dramatically – from those born after the fall of the wall to an influx of migration from every corner of the planet. This historic turning point in the country’s history is now a memory experienced through pictures, media, and first-hand accounts from those who were there. Amidst the celebrations of unity, we were reminded how technology plays a role in preserving the history of reunification, as well as the stories of those who experienced a divided Germany coming together.

The free MauAR app was developed by Beta Room to experience history in augmented reality and to better learn from it. The app let us gaze at our hometown in a new way, showing exactly where the wall was placed as well as educational anecdotes within different historic sites. Even today, in a unified city, there are still hints to the way in which the east and west developed divided during the time of the wall, not only from a societal standpoint but also at an infrastructural level.

For example, Berlin’s tram network, albeit well-designed, is only available in the eastern half of the city, while the west favored the U-Bahn service and private cars in postwar times. These legacies impact Berliners’ ability to navigate their city, specifically with last-mile gaps.

“Since its re-emergence as the German capital during the 1990s, the city has been undergoing a long and extensive process of upgrading, remodeling, and improving its transport infrastructure and undoing 50 years of the development of parallel but separate systems in the two former halves of the city.” -Giles K. Bailey, director at

As new micro-mobility solutions emerge with e-bikes and e-scooters, there are now more ways than ever to navigate the reunified city. We spent a lot of time this week reflecting on Berlin’s history and its impact on mobility as well as discussing the exciting opportunities that electric mobility has to better move people where they need to go.

Technology is essential in bridging gaps – both those of understanding and infrastructure. We can preserve the memories of the past while bridging the divide left behind.

At ePilot, we believe in innovation as a means to promote a more unified and equal city for all to navigate.